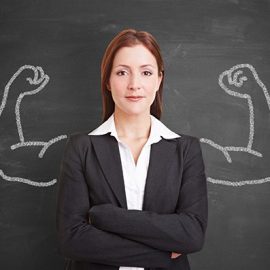 We’ve been speaking to Vana HR Resourcing about Resilience and Coaching….take a look at what our coaches Derek Wilson MBE and Julie Stokes OBE had to say on the subject……

An employee of a leading business is sitting at his desk one afternoon.

He’s at the top of his field in the organisation, contributing significantly to the bottom line. But he’s also a known workaholic and perfectionist, first in the office every morning, last to leave at night, and even coming in at weekends to the detriment of family life.

Eventually he’s found collapsed and on his way to hospital, a victim of ‘burnout’.

This true story is one with a happy ending (as we’ll discover later), and it’s a scenario that many will recognise to some extent – even if it doesn’t go as far as a trip to A&E.

The most recent figures from the Health & Safety Executive show that in 2015/16, of the 30.4 million working days lost due to self-reported work-related illness or injury, almost 26 million were attributed to work-related illness with stress, depression or anxiety accounting for the majority of these. Stress can inevitably manifest itself at the senior levels of an organisation. However, the manner in which Lloyds Banking Group CEO António Horta-Osório recently shared the story of his own breakdown reflects changing attitudes towards mental health including in a corporate context where, to date, burnout has been accepted as an occupational hazard.

With working life not set to slow down any time soon, especially in the digital information age, how then do we equip people to better deal with the demands of work – and what role does HR play? The Preston Associates (TPA) – an Executive Coaching company who Vana Resourcing partner with – have specialised support in place in the form of 1:1 or team coaching, aimed at developing the qualities of resilience in senior managers with benefits for both individual and employer.

So what do we mean by resilience?

“Resilience is about the ability to adapt rapidly to change,” says Derek Wilson MBE, one of TPA’s most experienced coaches. “It’s about living in the ‘here and now’ rather than a regretful yearning for ‘what was’ or ‘what may be’. It’s about the ability to quickly assimilate environmental information and build empathy, trust and commitment using great communication skills. At a personal level it is about building on a foundation of emotional competence which includes self-awareness, confidence to act decisively and a high degree of self-belief based on a clear sense of one’s own identity and values.”

According to Derek (pictured above), what makes people less resilient can be down to a variety of factors such as the inability to clearly identify challenges and overcome them, an insufficient social network to help manage stress and trauma, and general fitness (or lack of).

Some of these factors were clearly evident in the individual whose story we told at the beginning of this article, and who Derek was called in to help. So how was their life turned around? “It took 6 three-hour sessions over 6 months,” said Derek. “The first thing we did was to get his PA to indelibly ink into his diary one-and-a-half hour gym sessions three days a week. We then took him through a series of ‘remedies’ for a less stressed existence.” These ‘remedies’ varied from the obvious (keep fit, sleep more, take a proper lunch break) to the behavioural – more delegation and trust in others, less perfectionism, learning the art of saying no’ and Mindfulness.“To the individual’s credit, he was amenable to everything we discussed together as thinking partners. The result?  A happy, contented family man with a committed, responsive team and, despite it not being on my agenda at the time, he substantially increased the bottom line of his activities.”

So what role do senior HR professionals play in these circumstances?

“In this highly connected world of work, we find that HR Directors are needing to pay much greater attention to the culture set by those at the top of an organisation,” says Julie Stokes OBE, an Executive Coach and Consultant Clinical Psychologist also with The Preston Associates. “At TPA, we regularly coach directors around not only their own resilience – the capacity to bounce back – but also the impact they have on their teams. Executive coaching – quality time to think – is proven to be one of the most sustainable investments on promoting a resilient business culture.”

Or as Derek Wilson summarised, “the best investment one can make is investment in oneself.”

Register for our monthly Leadership Digest